Ceilings should never be overlooked when designing an interior. They are the fifth wall and a key element in an interior scheme, which if treated correctly have the ability to transform a room. They have a major impact on the feeling of the space, and are vital in creating a welcoming, timeless interior. 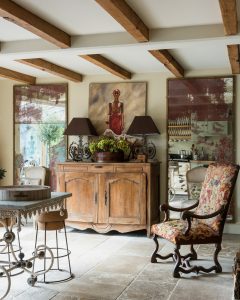 Above is the Kitchen at Frith House, my home, completed about four years ago

In the above kitchen I wanted to get the bones of the space right, adding features in keeping with the period of the property, to create that elusive quality which appears to have evolved over time. The oak cross beams, which are purely decorative rather than having any structural value, were added to the ceiling with this in mind. They are new beams which have been air dried, waxed and edges sanded to give the impression of being older than they are. They have the added advantage of taking your eye away from the two structural RSJ joists running down the centre of the room. The RSJ joists were clad, edges chamfered, and painted the same colour as the ceiling to soften the beams. The walls are painted String Farrow & Ball, and the ceiling and RSJ beams have been painted 50% Pointing and 50% String Farrow & Ball. Adding Pointing lightens the ceiling, whilst connecting it to the rest of the interior creating a welcoming feeling.

Above the late Jamie Parlade’s home in Carmona, near Seville

Jamie Parlade is long recognised as the doyen of Spanish designers, which can be seen to great effect in his Carmona home above. There is a seductive sense easy grandeur and charm. The ceiling has been painted a daring yellow, with light blue beams, the blue echoed on the fire surround. The floor is also equally flamboyent, but notice the white washed walls which balance the scheme, adding a sense of calm and serenity. This together with an alchemy of loved pieces translate the space into one in which you want to linger. The interiors appear as if they have not changed in generations, but in fact radical renovations were carried out, with everything combining to create a feeling of civilised comfort. 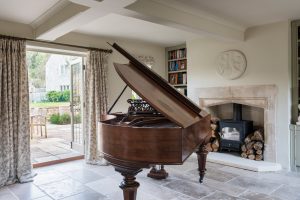 Above the music room at Frith House by Sutton House Interiors, in which the ceiling has been taken back to its original height after previous occupants lowed for recessed spotlights

I am a firm believer, in most cases, that the structural walls and ceilings of an old property are just meant to be. Dividing these rooms up with stud partition walls or lowering the ceiling to fit recessed lighting, often creates a space which looks uneasy and disproportionate. This was certainly the case for the music room at Frith House pictured above. The feel of this room, which used to be the kitchen, has been radically changed by raising the ceiling back to its original height. The RSJ structural beams had to be moved, but when revealed there was the large beam (as it is above) running from above the fireplace, and the two other beams not placed in alignment. We moved them, working with a structural engineer, so that they aligned in a pleasing cross. They were clad, a cornice added and edges chamfered, to take your eye away from the depth of the beams. The room is now a far cry from the oppressively low ceiling with a grid of “ceiling acne” recessed lights – not that I have anything against recessed lights when used in the correct way! The walls are painted Lime White Farrow & Ball, and again the ceiling and beams painted in a 50% mix of Lime White and Pointing, to echo the walls but add a lightness. 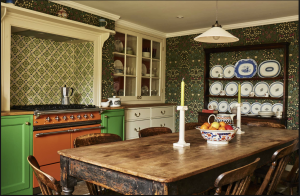 Above a kitchen project by Ben Pentreath 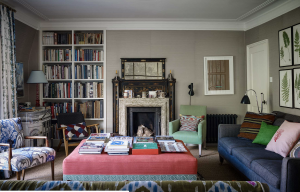 The above two images of interiors are by Ben Pentreath. Both ceilings have been painted white, but looking carefully I believe they are off whites. The ceiling of the charming kitchen, has a cream / yellow undertone, whereas the ceiling of the sitting room has a grey undertone, and it is these undertones rather than pure whites which create the harmonious interiors. Higher ceilings, especially those with a cornice work beautifully with off whites, which often also have the effect of grounding a scheme – especially important in this fabulously flamboyant kitchen. 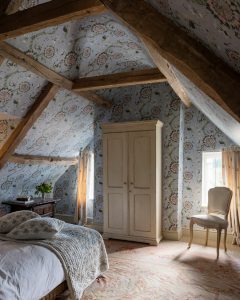 Above bedroom in the eaves by Sutton House Interiors

Again the ceiling of his attic room was really low which made it feel rather like a shoebox, emphasised with the built-in cupboards running along each side of the room. We knocked the ceiling out taking it back to the eaves, exposing the original beams which where sandblasted and cleaned. This beautiful Sunflower wallpaper by Juliet Chadwick works so well in this room. It is so important to fit wallpaper up into the eaves in attic rooms, or rooms with pitched ceilings, as it creates a wonderfully welcoming, timeless ambiance. 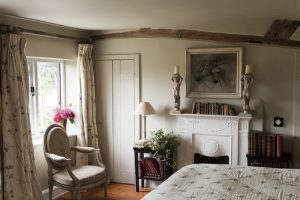 Above a charming guest bedroom in my mothers home

Many bedrooms with low ceilings, contrary to popular belief, benefit from painting the ceiling the same colour as the walls. A low ceiling painted white will only be highlighted. Indeed painting anything in a room white draws the eye to the object, which is fine if the intention is to place emphasis. The guest bedroom in my mothers home is so comfortable and welcoming, and this is owed in no small part to the ceiling colour.

Ceilings should never be overlooked when designing an interiors, and by following some of the tips above it is possible to create a comfortable and welcoming space in which one wants to linger.

Next month I will be discussing how to choose an interior colour scheme…..